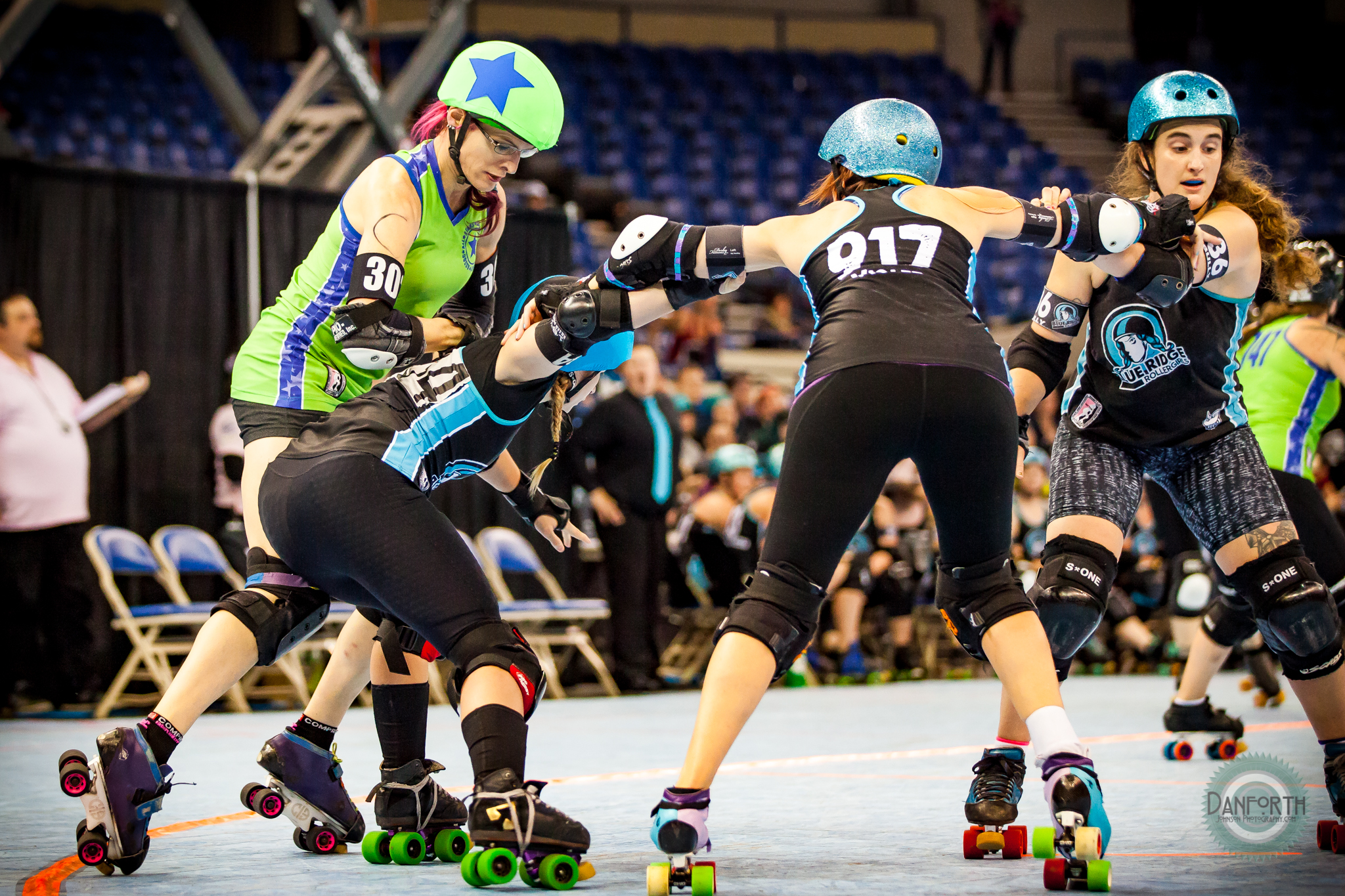 The second game of 2016 WFTDA Championships featured Division 2 Lansing winners, Calgary Roller Derby Association from Calgary, Alberta, Canada, facing D2 Wichita runners-up, Blue Ridge Rollergirls from Asheville, North Carolina, USA. The winner of this game, the Blue Ridge Rollergirls, is guaranteed at least a silver medal from D2 Championships while the loser, Calgary Roller Derby Association, has to fight for bronze after losing this game 225-183. The championship games on Sunday will be rematches of the D2 playoffs, with Blue Ridge taking on Brandywine Roller Derby from Downingtown, PA, USA for gold and Calgary facing Charlottesville Derby Dames from Charlottesville, VA, USA for bronze.

The game started the same way Game 1 finished; with jammer acrobatics, and nail-bitingly close scores. After the first three minutes, Blue Ridge Rollergirls led by only one point, 5-4. Calgary’s Kris Myass changed the score in the Canadian team’s favour, and her teammate Easy Break Oven grew that lead 27-5 in two consecutive jams before the game would return to the hit for hit battle of the first few jams. Two jammer penalties by Calgary’s Hilary Boswell and Easy Break Oven gave Blue Ridge an opening to regain the lead 43-34 with fourteen minutes gone. The Blue Ridge jammers were not immune to the penalty box either. However, Calgary’s ability to capitalize on being the only team with a jammer on the track was not on par with the Americans’; Calgary put up only 10 powerjam points in the first half (in contrast to Blue Ridge’s 59). Powerful and consistent jamming for Calgary’s Kris Myass (who earned lead 6 of 7 times with the star) kept the Canadians in the game with Blue Ridge ahead by only 5 points going into the second half.

That lead for Blue Ridge didn’t last long at the start of the half, however. Easy Break Oven scored 2 points after Kris Myass’ 4 to bring the Canadians ahead by one, 90-89. Then a slew of blocker penalties for Calgary prohibited their jammers’ ability to earn both lead and points, allowing Blue Ridge to add to their total again, and after ten minutes it was 116-99 for Blue Ridge but with their jammer, Lady Rider, in the box. Kris Myass lined up alone on the jammer line and put up 13 points before calling it after a block to her head (with Lady Rider still on her initial pass). It looked like this would be the start of a Calgary comeback, with clean skating from their blockers and jammers. Jenni Gunns, Easy Break Oven, and Kris Myass scored 19 points in the next four jams with great blocking from sin-e-star and anNa Molly. Facing a 6 point deficit, Blue Ridge jammer Dr. Octopushy took a risk and ran a long jam against Kris Myass.

“We just had a lot of energy,” explained Dr. Octopushy, Blue Ridge #88. “We felt like we’ve been under-ranked in the past few tournaments and so it just kind of drove us to push our hardest, and I think that was big.”

The gamble paid off with a 23-4 jam for Blue Ridge as pivot-turned-jammer Knox Hersoxoff of Calgary was stuck in the pack on her first scoring pass for almost two minutes. Blue Ridge took back the lead 148-135 with just over ten minutes left. Calgary looked shaken; more blocker penalties and a mistaken helmet cover removal meant Blue Ridge increased their lead to fourteen points before Dr. Octopushy sealed the game for the Ashevillians with a 38 point jam while Hilary Boswell sat in the box wearing the Calgary star. The following jam saw Lady Rider rub salt in the wound with 28 more points scored. Boswell started the jam from the box and passed the star to Preacher’s Slaughter, who tried her darnedest at redemption, managing 13 points as a pivot-turned-jammer. Calgary rallied, but it was too little, too late with Kris Myass and Easy Break Oven outscoring their competition 22-1 in the last two minutes, leaving the final score 225-183 for Blue Ridge.

“We can’t believe it,” exclaimed Dr. Octopushy after the game. “Yeah, we really can’t. I mean, we couldn’t even believe we made it to Portland, and now we’re going for gold. It’s just kind of unreal. We’ve been working really hard.”

Blue Ridge goes on to face Brandywine at 2pm on Sunday for D2 gold. Calgary will face Charlottesville at noon on Sunday for the bronze.