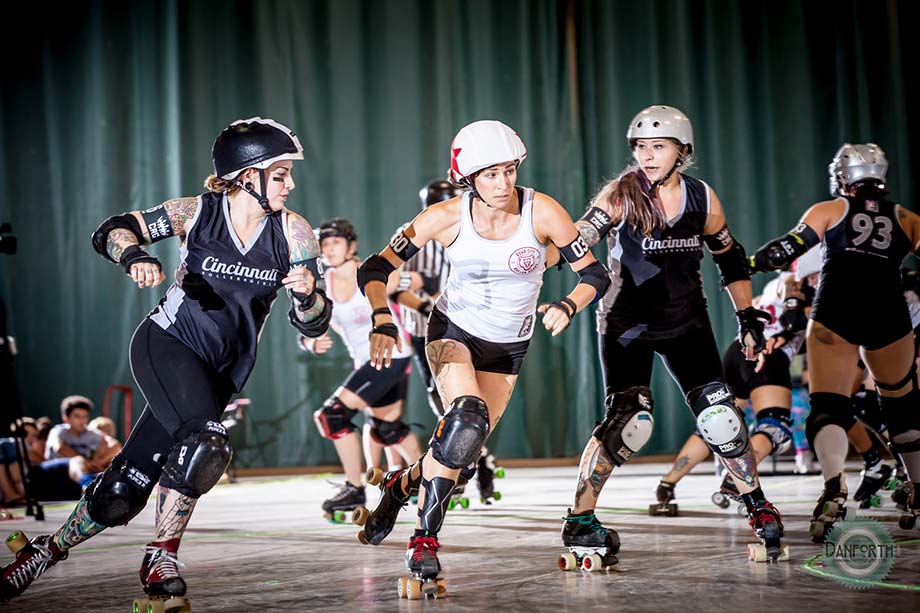 Bear City grabbed the lead in the first jam with a 4-0 posting by Mia Missile and never looked back. In the first half, Bear City stayed with a consistent jammer rotation of Mia Missile, Peanut Butter Panic, Donner Doro, and Jane van Pain; together they earned 10 of 16 lead jams and 184 points before halftime. Cincinnati started with a three-jammer rotation of Jas Hubbard, Wheezy, and Anne Bones, but threw in Macrum as the period progressed, and finished the half with a combined total of 58 points.

Jammers made plenty of trips to the penalty box; Bear City lost their jammer six times and Cincinnati lost theirs eight times during the half. Both teams also employed successful star passes at appropriate times, with Cincinnati slightly more inclined to pass the star (3 passes), than Bear City (2 passes, plus one failed attempt). The Bear City defense overwhelmed the Cincinnati jammers by switching fluidly from defense to offense, and ably corralling solo Cincinnati blockers to drag pack definition to the rear to assist their jammer in breaking away from the front of the pack. The Bear City combination of McHerCry, Heavy Rotation, and Emmazon was particularly deadly for the Cincinnati jammers, forcing several track cuts and numerous recycles through the pack.

Bear City proceeded to dominate in the second half and kept with their four-jammer rotation throughout the game. Cincinnati added fresh legs to their rotation, including Sailor Scary, Jillian Dollaz, Kitten Kicker (on a star pass), Nuk’em, I, Caramba!, and Chainsaw Chic. Both teams continued to experience a trickle of jammer penalties, with Bear City losing their jammer six times to Cincinnati’s seven—including an unfortunate run four jams in a row. Cincinnati had some blocking highlights, as Wheezy and La Bruja found themselves alone on the track but still were able to hold back Mia Missile. Sailor Scary also provided effective solo blocking when facing off against Donner Doro. Cincinnati held Bear City scoreless for a three-jam run in the half, but the damage was already done. Bear City displayed several offensive strategies, but their most impressive offense came from McHerCry, who repeatedly bust up several Cincinnati triangles all by herself to get her jammer through. Bear City’s Mia Missile owned the two highest scoring jams of the game—one per half, both totaling 32 points each. Bear City also earned 11 of 15 lead jam calls for an additional 172 points in the half, earning the upset win with a final score of 356-128.