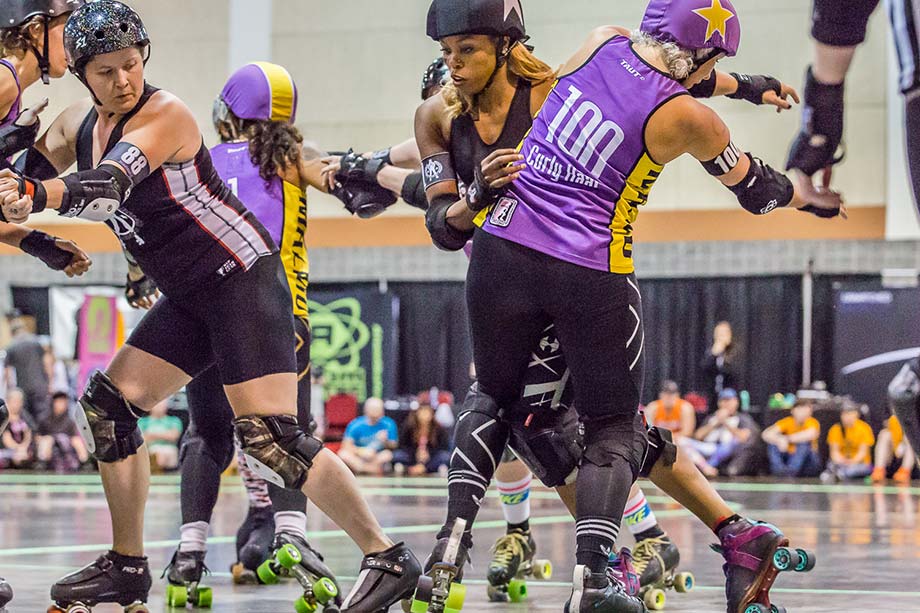 Columbia squeaked out a win against the Ann Arbor Derby Dimes on Friday, and then left everything on the track against top-seeded Rose City Rollers later in the day. Crime City nearly upset the Atlanta Rollergirls (#4) on Friday, having scratched their way out of a deficit and then losing in the last few jams. Neither team wanted to lose again. For the first seven jams, Columbia and Crime City traded lead jammer status and points. Poison Violet, Rox Ann Stones, Hanna P, and Prince Sofia all had multi-pass jams for both teams. Once Jam 8 hit, the story changed. Crime City earned lead jammer eight times in a row, and put up 38 points to Columbia’s two.

Columbia utilized looser defensive shapes, relying on brutal strength to punish jammers. They also utilized Poison Violet, a standard in their jammer rotation, as a crucial blocker/pivot. Chuck-Town Bruiser and StarSpangled BanGRR did a lot of work on the floor trying to contain the fleet-footed Swedes. Penalty trouble plagued Columbia. Their blockers sat in the box 18 times, and their jammers three times.

In the second half, Columbia came out with a different strategy: play jammer power. Coach Donkey explained,

“Between injuries and ineffectiveness we had to do something different… So basically we played the jammers who did well against Rose.”

Carinno and Poison came out of the jamming rotation, with Rox Ann Stone and Holly Hunter taking their places.

Crime City seemed unphased. They stayed the course and were rewarded. In the first jam after halftime, Columbia lost Chuck-Town Bruiser to foul out. She would be followed by Barney Rebel in Jam 16. Crime City’s defense was constant and sure. They trusted each other and recycled jammers all day long. The first 15 jams were won by Crime City in the second half, but the last four of five jams were won by a sudden burst of energy by Columbia’s jammers, adding 18 points to their team’s total. Secret jammer Rox Ann Stones put 36 points on the board for Columbia throughout the game.

Columbia just could not get a beat on the line work of the Crime City jammers. Price Sofia earned lead jammer in 68.8 percent of her jams, and scored 102 points for Crime City. Hanna P was not far behind, earning lead 75 percent of her jams and scoring 88 points against the hometown team.

Crime City will move on to play Rainy City Roller Derby (#7) at 2 p.m. EST Sunday in a battle to keep their Fifth Place slot. Columbia will wake up earlier to face off against the Santa Cruz Derby Girls (#6) at noon EST Sunday.