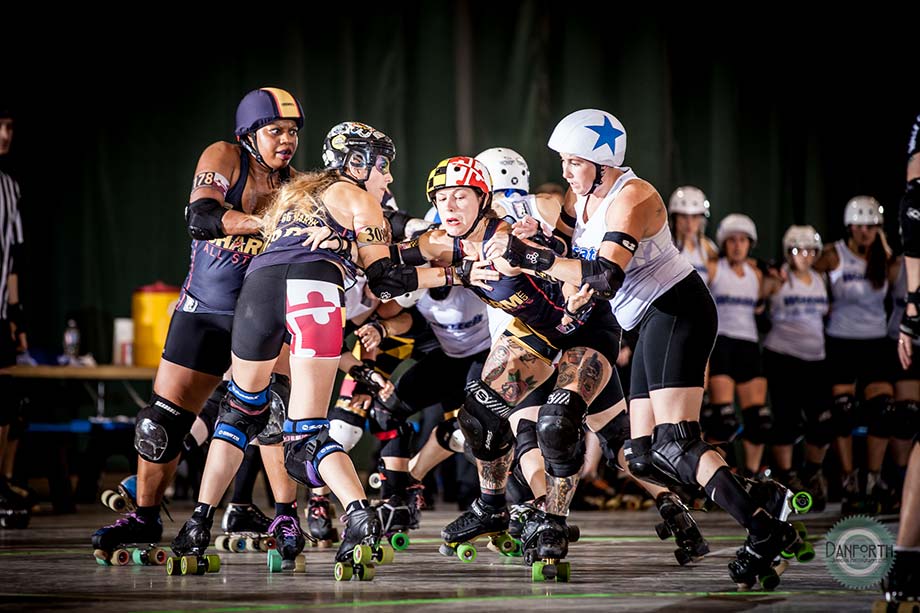 In the third place game of the 2016 International WFTDA Division 2 Playoffs Lansing, Wasatch Roller Derby Midnight Terror (seed #3, WFTDA #45) from Salt Lake City, UT, USA hoped to retain their third place seeding while the Charm City Roller Girls All-Stars from Baltimore, MD USA (seed #1, WFTDA #33) aimed to prove that their loss to the Calgary All-Stars on Saturday was an anomaly. Hardware was on the line for this game since the team placing third would receive a medal, and Charm earned theirs with a 197-194 win after an intense battle.

We were treated to amazing toe stop work from Charm jammers Dottie Deathwish, LeBrawn Maimes, and I.M. Pain, along with sensational sideways and backwards juking from Wasatch jammers Stache Bot, Sookie Slaphouse, and Wreckless. The teams looked evenly-matched during the first five jams, with each jam picking up less than a full scoring pass. Wasatch, with five minutes gone, delivered the first round of multiple scoring passes when Wreckless picked up 17 points against Charm City’s LeBrawn Maimes, bringing the score to 20-9 for Wasatch. Charm then sent out top jammer I.M. Pain, who put 11 points on the board for Baltimore in the very next jam. It was a brief flurry of points, and the game settled back into single scoring passes until Charm took the lead 15 minutes in with a 16-0 jam for I.M. Pain. Three jams later, Sookie Slaphouse was given an opportunity to close the gap for Wasatch when I.M. Pain was sent to the box on a forearm. Wasatch capitalized on the moment and put up 19 points, retaking the lead that they would hang onto until the very last jam of the period. That’s when jammer tradeouts in the box worked in Charm’s favor, resulting in an 18-3 jam that brought the score to 81-78, with Charm leading at the half.

During the second period, Wasatch narrowed their already short jammer rotation to just two, with Sookie Slaphouse and Wreckless going every other jam. Stache Bot only wore the star once in the half. Tension grew as the number of lead changes increased and blockers started fouling out. Wreckless helped her team retake the lead in the very first jam of the half by putting five points on the board for Wasatch, but by the end of the fourth jam, the score was tied after Dottie Deathwish capitalized on Sookie Slaphouse’s track cut, scoring 17 to Wasatch’s 4. It looked like Charm would take the lead with ten minutes gone in the half when Wreckless didn’t get out of the pack and Dottie Deathwish was skating laps. But Skull Candi, the lone blocker on the track for Wasatch, would salvage the jam by pulling a track cut on Dottie, leaving Wasatch in the lead 118-112. That relief for Wasatch was short-lived and Dottie Deathwish redeemed herself by running up a 10-0 jam once she returned to the track, taking the lead for Baltimore 127-122. In the very next jam, stunning work from Wreckless against I.M. Pain put 9 points on the board for Wasatch while Charm was left scoreless. Wasatch took the lead, 131-127, and Charm wouldn’t see the better side of the scoreboard until there were only five minutes left in the game.

In just two jams, Charm overcame a 22-point deficit to grab lead by one point and bring the score to 170-169. The last four jams displayed careful clock management between each jam. With three-and-a-half minutes left, after a 4-0 jam win by Wasatch, Charm would stop the clock before losing the next jam 17-12. Charm had now dropped 8 points behind Wasatch’s 190. An official review after that jam again stopped the clock, before Dottie Deathwish, jamming for Charm, grabbed a 3-0 to narrow the gap to to 5 points. Charm put I.M. Pain back on the track for the final jam, and she lined up next to Wreckless with 30 seconds left on the clock at the whistle. After multiple scoring passes from I.M. Pain in an intense arena, she called off the jam, ending the game. It looked like it hadn’t been enough to close the gap and the scoreboard read 194-193 for Wasatch. Wasatch began celebrating, but after the officials discussed the score, they determined that I.M. Pain had, in fact, picked up an additional 3 points. The scoreboard changed to 197-194 in favor of Charm City, earning them third place and and moving Wasatch down to fourth.