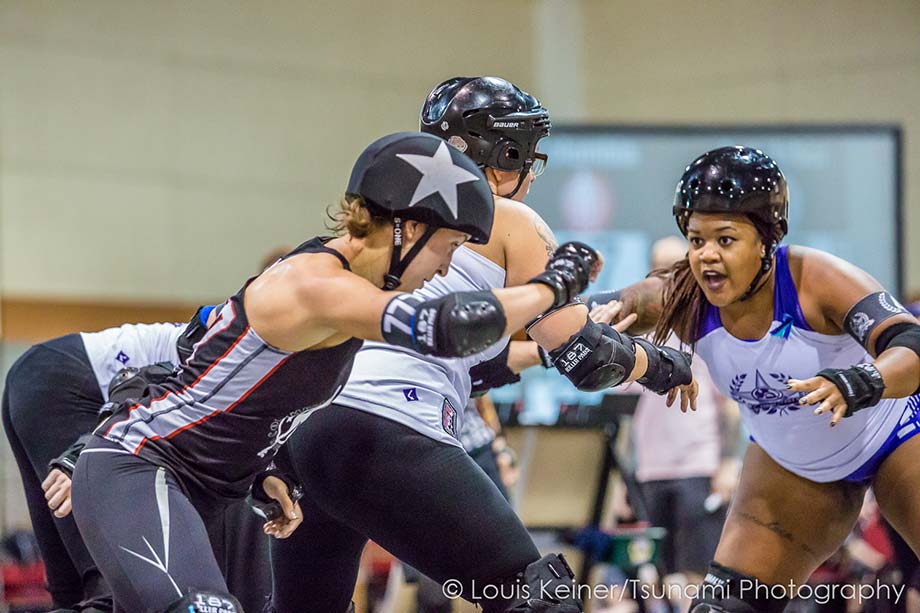 The roller derby fans have been talking about the rise of the Ann Arbor Derby Dimes from Ann Arbor, MI, USA all year. They’re known for skating clean and together — two factors that helped their ascent into the 2016 International WFTDA Division 1 Playoffs. The question was whether they could continue to play their game against the higher ranked home team, Columbia Quad Squad of Columbia, SC, USA. Columbia, meanwhile, is known for ending up in penalty trouble in playoffs, averaging 42 penalties per game in the post-season. While Ann Arbor looked dominant for a time, they wouldn’t be able to hold on to the win with the host league taking it in the very last jam, 149-145.

The first half started with 24 unanswered points for Ann Arbor and three penalties to Columbia jammer, Erin N. Carrino across the first two jams. The third jam of the game would see the home team finally get on the board with Do U Juana picking up 2 points with Ann Arbor jammer Lezzie Arnaz hot behind her. Ann Arbor’s back wall locked in the Columbia jammers and caused them penalty trouble. A two-minute jam halfway through the period grew the lead to 57-17 with only Rox Ann Stones and Sour on the track for Columbia, as the rest were in the box for penalties. When both teams had full packs, the jams were grinding; even with dedicated offense, jammers had a hard time getting through. As the half wore on, Columbia would start to inch their way back with the final jam going their way, 12-4 as Holly Hunter came out of the box to earn lead and forced Ann Arbor’s jammer, Slamuel L. Jackson, to pass the star to pivot, Dr. Maims U. Columbia had cut the lead from 50 points to 41 points as they went to their locker room.

The second half saw a renewed Columbia team and crowd. The stun from the first two jams of the game had worn off and everyone knew there was a chance for a comeback. Taking the back wall and committing to a chaotic offense style saw the first three jams break almost even at 24-25. Ann Arbor jammer, Terror Misu, who had been a powerhouse in the first half, looked stymied by Columbia’s back wall and picked up a penalty trying to get around it. Three jams later, Terror Misu would find trouble again, back blocking an opponent, and Poison Violet would capitalize by putting up Columbia’s highest single point jam, 15-0. The lead closed to 121-86 with just under 20 minutes left in the game. The next jam would see Ann Arbor’s other major jammer, Lezzie Arnez, penalized and Do U Juana, with offensive help from the likes of Roxy Rampage and Rox Ann Stones, scored 12 points of her own. A third penalty for a third Ann Arbor jammer, Slamuel L. Jackson, meant that Columbia had held the Michigan team scoreless for four jams while adding 41 points to their own total and making it a nine-point game, the closest it had been since the end of the first jam. Ann Arbor, in an attempt to stem the tide, put Jadzia Smax on the jammer line for the first time with 12 minutes left in the game. They skated circles around the lone Columbia blocker and while Do U Juana managed to skate cleanly as the Columbia jammer, Ann Arbor’s blockers did not let up. Ann Arbor pulled away again 140-115 with ten minutes left in the game. That jam was the last time Ann Arbor would win a jam though. Columbia’s jammers, Poison Violet, Erin N. Carrino, and Do U Juana, picked up lead and a single scoring pass over and over again to bring the score to 145-144 for Ann Arbor with under two minutes left. Ann Arbor fielded Sonnet Boom for the final jam — while she had only four jams in the game, they had been clean until then. Columbia skated Poison Violet in the final jam despite the fact she had just jammed immediately before it. Poison Violet got through her initial pass quickly while Sonnet Boom was stuck in the pack. Her second pass, however, was not so easy and after a track cut to Sonnet Boom, Poison Violet, needing only one point and having been stuck on her second scoring pass for a long time, disengaged and waited for the period clock to tick down before calling it rather than risking a penalty. As the fourth whistle blew, the score ticked up to 149-145 for Columbia, giving them their first lead of the game and the win.

Columbia goes on to face Rose City Rollers (#1) from Portland, OR, USA at 8 p.m. EST tonight. Ann Arbor will play at 10 a.m. EST on Saturday against the loser of Game 3.