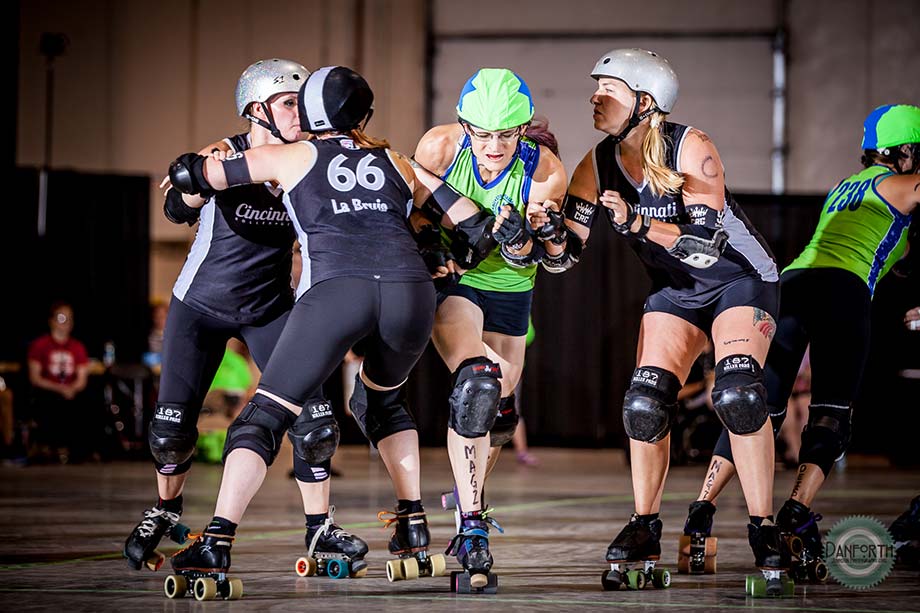 The final game of Friday at 2016 International WFTDA Division 2 Playoffs Lansing was the first WFTDA playoff game ever for the Calgary Roller Derby Association All Stars from Calgary, AB, CAN and the first WFTDA playoff game in three years for the Cincinnati Roller Girls Black Sheep from Cincinnati, OH, USA. In what should have been the closest game—with the 4th seed Americans matching up against the 5th seed Canadians—Calgary performed masterfully and showed no first-time jitters as they took the win, 232-97.

Initial jams were fast and loose with a lot of lone blocker coverage and jammer penalties abounding. Between the two teams, the first nine jams saw ten jammer penalties. Calgary managed to take advantage when their jammer was on the track and put up a 15 point jam by Gunns and a 20 point jam by Easy Break Oven, while the blocking of Knox and Preacher’s Slaughter kept Cincinnati jammers from racking up points as Calgary’s jammers were in the box. After a Calgary timeout to calm the team, the Canadians led 72-27 just sixteen minutes into the half. Three jammer penalty-free jams later, Calgary found themselves in trouble again with Gunns getting three penalties in one jam while wearing the star. Wheezy, having returned to Cincinnati after a year off, didn’t lose a stride and put up a 13-0 jam to bring the score to 76-46 with just under ten minutes left in the half. The end of the half would see four more jammer penalties in three jams. TAZ was a standout blocker for Calgary’s defense, keeping the Americans to only 9 points on two jammer trips while Calgary added 37 points to their side of the border. Calgary went into the half with the lead, 113-60.

Despite the jammer issues for both teams, Calgary and Cincinnati both stuck with their jammer rotations from the first half. Calgary ran a four jammer rotation of Kris Myass, Easy Break Oven, Hilary Boswell, and Roc-A-Felon with relief jamming from Jenni Gunns. Cincinnati had a shorter rotation with just a three jammer line-up: Jas Hubbard, Royal T, and Wheezy.

Cincinnati capitalized better on Calgary’s penalties in the second half, but Calgary also cleaned up their skating and gave up only three power jams in the first ten minutes. The score was 152-83 for Calgary with just over 18 minutes left in the game. Calgary would continue to settle into their game and go on a 67-9 scoring run to finish the half. But jammers from both teams dug themselves into deeper penalty trouble, bringing the total jammer penalties for the game to 28. Calgary, in fact, had more jammer penalties than blocker penalties. The game would finish with a jam which encapsulated much of the previous fifty-eight minutes: Jenni Gunns and Royal T both went to the box as jammers, Calgary’s TAZ delivered masterful individual blocking, and Calgary took the jam, 13-5, to bring the score to 232-97 for the Canadians.

The Calgary All Stars will go on to face the 1st seed Charm City All Stars from Baltimore, MD, USA at 2 p.m. Saturday and they’ll improve their seeding in this tournament no matter what the outcome is of that game. Cincinnati is relegated to the consolation bracket and will play the Grand Raggidy All Stars from Grand Rapids, MI, USA at noon Saturday.