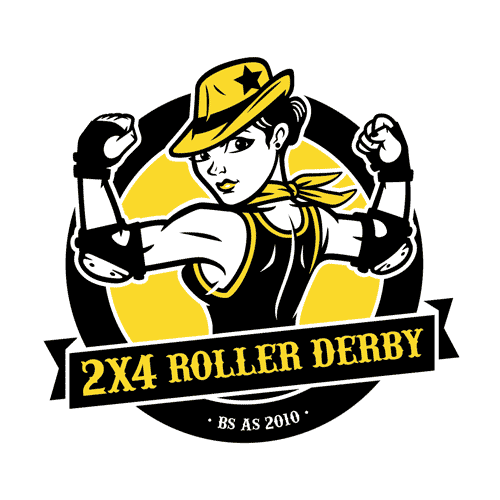 This was the first game of the tournament weekend for Angel City after securing a by in the first round of play that kicked off on Friday. 2×4, meanwhile, played earlier in the weekend against their hometown rivals, Sailor City Rollers of Buenos Aires, Argentina, where 2×4 took a 210-53 victory to earn their place against Angel City.

Angel City, no strangers to WFTDA playoff season with their eighth-consecutive showing at the post-season tournament, took the first lead jammer of the game when Pearl Jam busted through the pack moments before 2×4’s Tropical Mecánica passed the star to teammate Maki Lombera. Tough walls on both sides locked their opposing jammers in place and recycled them repeatedly to the end of the pack, but Angel took the first lead with 9-4 points in their favor.

2×4 star passes are a thing of beauty 😍 #talk2wftda

Despite this only being their second year to make it to WFTDA playoffs, 2×4 held strong in their showing against the veteran Angel City Hollywood Scarlets. 2×4’s Loba racked up 15 points to 0 in jam 4 to lessen Angel’s lead to 36-28. Angel went into jam 7 with just a 7-point lead before Rachel Rotten answered Loba’s points with a 15-0 jam of her own in the Scarlets’ favor.

Angel’s lead continued to widen into jam 11 when Mr. 305, Dale, added another 10 points to the board for a 75-37 advantage to LA. With some late-half power jams in their favor, Angel City ended the first half with a 130-66 lead after Rachel Rotten nabbed 25 unanswered points in the last jam.

Angel kicked off the second half on a power start, but Pearl Jam was quickly assessed a forearm penalty that sprang Rayo from the box, at which point she quickly took lead for 2×4. Angel City’s solid defensive walls, however, prevented 2×4 from taking advantage of their power jam and the first jam of the half ended scoreless for both teams.

The physical differences between these two are making this game the most fun to watch. As much as I love a strategic grindy game, it’s brilliant watching super mini players just take out opponents twice their height.

Loba sought to change that in jam 2 by adding 15 more unanswered points to the board for 2×4, bringing the score to 130-81 in Angel’s favor.

Both teams continued to nickel and dime the following jams to inch their scores up while hard-hitting defensive on both sides punished jammers over and over again. A few large jams in Angel’s favor, like Rachel Rotten’s 10-point run in jam 12 and 13 points in jam 15 helped take them to their final 218-125 victory.

Angel will go on to play the Crime City Rollers of Malmo, Sweden (Seed #3, WFTDA #10) at 8:20 p.m. on Saturday. 2×4 moves to the consolation bracket where they will square off against Helsinki Roller Derby of Helsinki, Finland (Seed #5, WFTDA #13) on Sunday at 1 p.m.