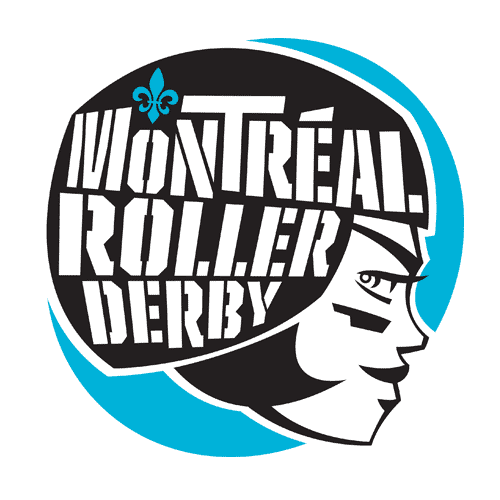 The crowd from Montréal, Canada was noisy. It was so noisy that at times, even here in the balmy foothills of the Appalachian Trail, the yelling could be heard. Noisy because not only was Montréal was hosting the 2019 International WFTDA Championships, but because their home team was playing against Gotham Girls Roller Derby of New York City, New York, U.S. (Seed #2, WFTDA #3). It was so loud, that any place near this particular game would know that two giants were playing against each other.

Unfortunately on a night such as this, Montréal Roller Derby (Seattle Playoffs #2, WFTDA #8) was unable to pull out a win for their home crowd, but they certainly felt the love of their city. A city that let them know even after being down by 32 points at halftime, the arena was still noisy and vibrating with excitement.

This game is way too tight for our poor little hearts. And what amazing supports from our home crowd. pic.twitter.com/oiO6nvwsqN

Gotham Girls Roller Derby came into this game having watched Montréal defeat 2×4 Roller Derby of Buenos Aires, Argentina (Winston-Salem Playoffs #3, WFTDA #10) earlier in the day, in which Montréal showed how strong their legs and appetite for winning were.

mack has always been killer with this type of hit, and it never gets old. #derbytwitter #wftdachamps pic.twitter.com/eL31MxUyl4

Not to be out done by The Smacktivist were Montréal’s Falcon Punch and Badger, both working as blockers and jammers to support their team. In fact, in Jam 7, Gotham’s Violet Knockout laid a strong hit on Badger which had little affect on her. Badger was fun to watch jam and block, as you never knew when she would break up a wall for Falcon or Miracle Whips, or use her strength to push herself through to score points.

Frequently, Miracle Whips and The Smackivist were pitted against each other, both exhibiting the athletic ability the sport has come to expect from these two names.

In the second half, Gotham and The New Skids came out to play hard again. Kate Sera Sera, a Gotham jammer known for bending backward, toeing the line, and apex jumps, came to life. Coming out of the locker room after halftime, Gotham’s jammers, Beauty Andie Beast, Kate Sera Sera, Space Invader, and The Smacktivist were clearly all standing around discussing, well who knows, because it was loud in Montréal. But there was one jammer who was noticeably missing from their rotation: Miss Tea Maven. After a season-ending injury, Maven could be seen giving all of her teammates high-fives on the bench and coaching. But in that jammers’ moment after half, she was high-fiving the jammers and rooting for them.

Had it not been for blockers such as Fast & Luce, Violet Knockout, Bonita Apple Bomb, and Gotham team captain Roxy Dallas the team as a whole would not have been as successful.

After the game, Rich Mahogany interviewed Roxy Dallas and asked how the team prepared for Montréal. Roxy said, “Playing them, we get a chance to learn from them. They are a hard team to deal with so we talk to each other a lot and plan for them. They have difficult jammers, but so do we.”  Mahogany asked one final question of Roxy, “What would the rest of her evening be? Going out for food?” Laughing, Roxy said, “It would take 10 of those to make up one NYC bagel. I think I’ll just settle for some Law and Order: SVU.”