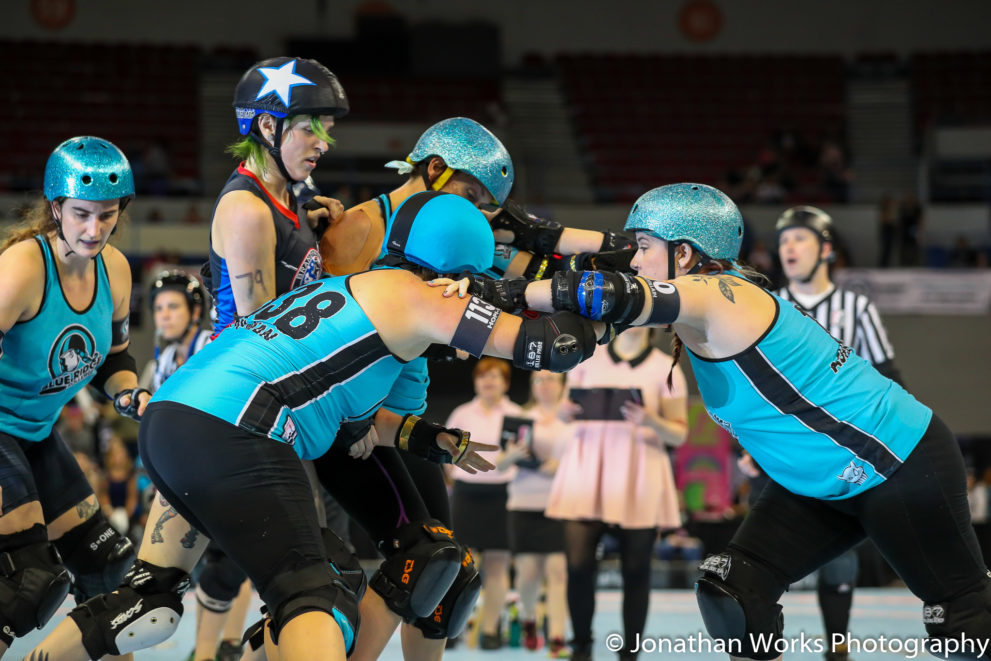 The gold medal D2 game at WFTDA 2016 Championships was a re-match of D2 Wichita earlier this year. Brandywine Roller Derby from Downingtown, PA, USA took that game coming from behind in the second half, 146-123 against the Blue Ridge Rollergirls of Asheville, NC, USA. They were not able to do so this time around, with the higher ranked Blue Ridge Rollergirls building enough of a cushion that any second half momentum swings couldn’t change the outcome.

The start of the first half saw Brandywine come out swinging. After five minutes they led 30-8 with two huge jams by Raggedy Aneurysm and Lurz Lemon. However, Blue Ridge adapted and started shutting down Raggedy Aneurysm by slowing the pack and starting in solid formations. They climbed back to within 15 points, 35-20, with 10 minutes gone in the half when it looked like that the momentum would swing back in Brandywine’s favor once more. Dr. Octopushy was on the line facing a full contingent of Brandywine blockers with only Boot Scootin Bully and Hopi-wan as support. That would prove to be enough though; with Lurz Lemon going to the penalty box on a low block, Blue Ridge put up the biggest jam yet, scoring 16 points and taking the lead 36-35. With that the floodgates opened, and Blue Ridge went on a 66-5 scoring run. The only jammer really having success for Brandywine was Lurz Lemon who, in a cruel twist of fate, was expelled twenty minutes into the game for an egregious low block. The question became who could Brandywine jam to fill Lurz Lemon’s spot, as they typically run a three jammer rotation. Slamshine Allie was their initial answer. Her first time with the star was a huge success, with a 16-0 jam closing the gap to under 30 points. Her next turn with the star however, saw a reversal of fortune when Blue Ridge’s Lady Rider scored 21 points after Slamshine Allie was boxed for a track cut. At the half Blue Ridge led comfortably, 125-78.

Brandywine looked strong coming into the second half, having finished the first with a 9-0 jam by Raggedy Aneurysm. They started the second with a 5 point jam by her as well. Dedicating an offensive blocker to get the Blue Ridge blockers rolling allowed Raggedy Aneurysm to juke and dive around her opponents. A comeback like the one in Wichita seemed possible. However, Slamshine Allie and Buenos D. A$$ were still struggling with Blue Ridge’s defense. While Brandywine’s defense led by Ballerinka and KickAsh were playing physical pinball with Blue Ridge’s jammers, Brandywine’s offense struggled in a way that wasn’t seen during Wichita.

“After Wichita, we trained to defend against Brandywine’s style of offense,” said Hopi-wan, a blocker for Blue Ridge. “It cost us that game and allowed them to dominate. We knew we had to be proactive to make sure that it didn’t happen again.”

Brandywine resorted to more star passes to stem scoring runs by the supremely fast and agile Dr. Octopushy and Lady Rider, but with fifteen minutes left, the lead had grown to 185-113 for Blue Ridge. If Brandywine didn’t act right then, the game would be out of hand.

Buenos D. A$$ provided that glimmer of hope with an 18-4 jam against Blue Ridge relief jammer Hurrycane Jackie. Raggedy Aneurysm followed with a 14-4 jam of her own, bringing the lead down to 48 points with eleven minutes remaining. The next two jams were near washes with Blue Ridge running out the clock when they had lead. Brandywine couldn’t afford to keep the gap the same though, and Raggedy Aneurysm put up a 10 jam with Dr. Octopushy in the box for the first time in the game.

Still, it wouldn’t be enough, as Tractor Taylor and Lady Rider scored 27 points in the next two jams before Dr. Octopushy finished it off for Blue Ridge Rollergirls, scoring the final 24 of her 129 points in the game.

Blue Ridge won 257-188, despite the late game push by Brandywine, and will head home from Portland as D2 championships.