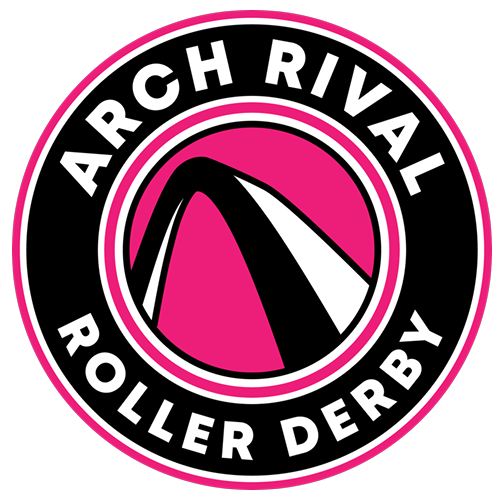 Arch Rival will play for third place against Victorian Roller Derby League of Melbourne, Victoria, Australia (Seed #3, WFTDA #2), which is the furthest Arch Rival has made it at WFTDA Champs.

The path through Arch Rival was not an easy one. The first period was incredibly tight. Arch Rival’s defense locked down Rose’s jammers and it often took a solid minute for someone to breach the defense and earn lead jammer status.

I just really need to gush about Dad Bod holding Loren Mutch solo on that outside line #talk2wftda pic.twitter.com/RSd3tUU1t4

Lead jammer status was spread evenly between the teams in the first half, with Arch Rival able to navigate Rose’s defense enough to keep the score close, bringing it to a tie, and at times, taking the lead. At the half, Rose had an uncomfortable lead 64-52.

Something often happens during those halftime talks and Saturday’s semifinal was no different. Rose City came out stronger, harder, and quicker in the second half. With a small adjustment, Rose City’s offense helped their jammers slice through the initial pack for quick lead jammer status. Arch Rival’s defense depended on the catch and keep, subjecting Rose City’s jammers to a long grind for points or lead.

This is what you have to do as a jammer to get lead over Rose City. Dang, Loki. This has been such a GAME. #DerbyTwitter #WFTDAchamps pic.twitter.com/cuKvacz4ea

Rose City’s Loren Mutch started the second with a power jam, scored 10 points to Arch Rival’s 0 and Rose never stopped after that. Rose earned more lead jams (15-8) in the second half and held Arch Rival scoreless in several jams throughout the period.

Arch Rival never stopped chasing but they were not able to shift their defense to compensate for Rose’s changes. It’s hard to stop the Rose City jammers when they are pirouetting, blasting through or leaping over the pack.

"Bonnie Thunders can score,
Does score;
Has four,
And now four more"

Both teams caught the same number of penalties (26 each) throughout the game and there were very few jammer penalties on either side, but enough during the second period to give Rose City that edge they needed to get back to the finals.

Congrats to @RCRAllStars on a fantastic win and congrats to @ArchRivalSTL on making them really work for it. The lesson of the weekend is nobody puts Arch in a corner. #cornfedstickyderby #derbytwitter #WFTDAChamps #talk2wftda

Arch Rival will play Victorian Roller Derby League for the bronze medal Sunday at 2:00pm EST, and the Championship game between Rose City and Gotham starts at 4:30.