The gold medal game is a familiar place for both these teams: Rose City’s Wheels of Justice has reached the championship game in each of the last six seasons, denying Gotham their fifth-consecutive title in 2015. Rose also defeated Gotham for the Hydra in 2016. Gotham still holds a record five WFTDA Championships.

Rose City advanced to the final with victories over Arch Rival and Philly Roller Derby of Philadelphia, Pennsylvania, U.S. Philly, the #3 seed from the Seattle Playoffs, had upset the Texas Rollergirls of Austin, Texas, U.S., the #2 seed from the Winston-Salem Playoffs to open the tournament.

Gotham came up through the other side of the bracket and defeated Victoria to get to the championship game, and started off with a victory over host league Montréal Roller Derby of Montréal, Québec, Canada, the #2 seed from the Seattle playoffs.

Another notable game was the five-point victory Arch Rival took over Denver Roller Derby of Denver, Colorado, U.S. Arch Rival earned an automatic Championships bid with a higher WFTDA Ranking earlier in the year, while Denver came up by winning the Seattle Playoffs. However, by the time these teams met in Montréal, Denver had jumped one spot over Arch Rival in the rankings. This close matchup led to the slimmest margin of victory of any game in the tournament.

This event also marked another WFTDA milestone, as 2×4 Roller Derby of Buenos Aires, Argentina became the first team from South America to qualify for WFTDA Championships. They lost games to Montréal Roller Derby and the Texas Rollergirls of Austin, Texas, U.S. but quickly established themselves as a fan-favorite team.

A highlight of the tournament weekend was the We Are Nation: A Game Without Borders exhibition between Team Indigenous Rising and Jewish Roller Derby. The game was designed to “showcase, support, and honor” the teams and the communities they represent.

Bonita Apple Bomb of Gotham Girls Roller Derby was named the tournament MVP not only for her exceptional work as a blocker during the weekend, but also for her role as a veteran team leader and WFTDA Representative for her league.

The final Bracket Challenge of the year ended in a tie, with LadyBunz & Squirrel231 both having perfect brackets at the end of the tournament. Thanks to everyone who played this year’s Bracket Challenge by Derby on Toast!

Congratulations to all of the participating teams, and thanks to all the officials, announcers, photographers, and other volunteers who made the weekend in Montréal such a success! Special thanks go out to tournament hosts Montréal Roller Derby for welcoming the WFTDA community to Québec.

If you missed out on any of the action this weekend, check out game photos and recaps at Championships Tournament Central, and watch the game archives on WFTDA.tv when they become available later in the week. 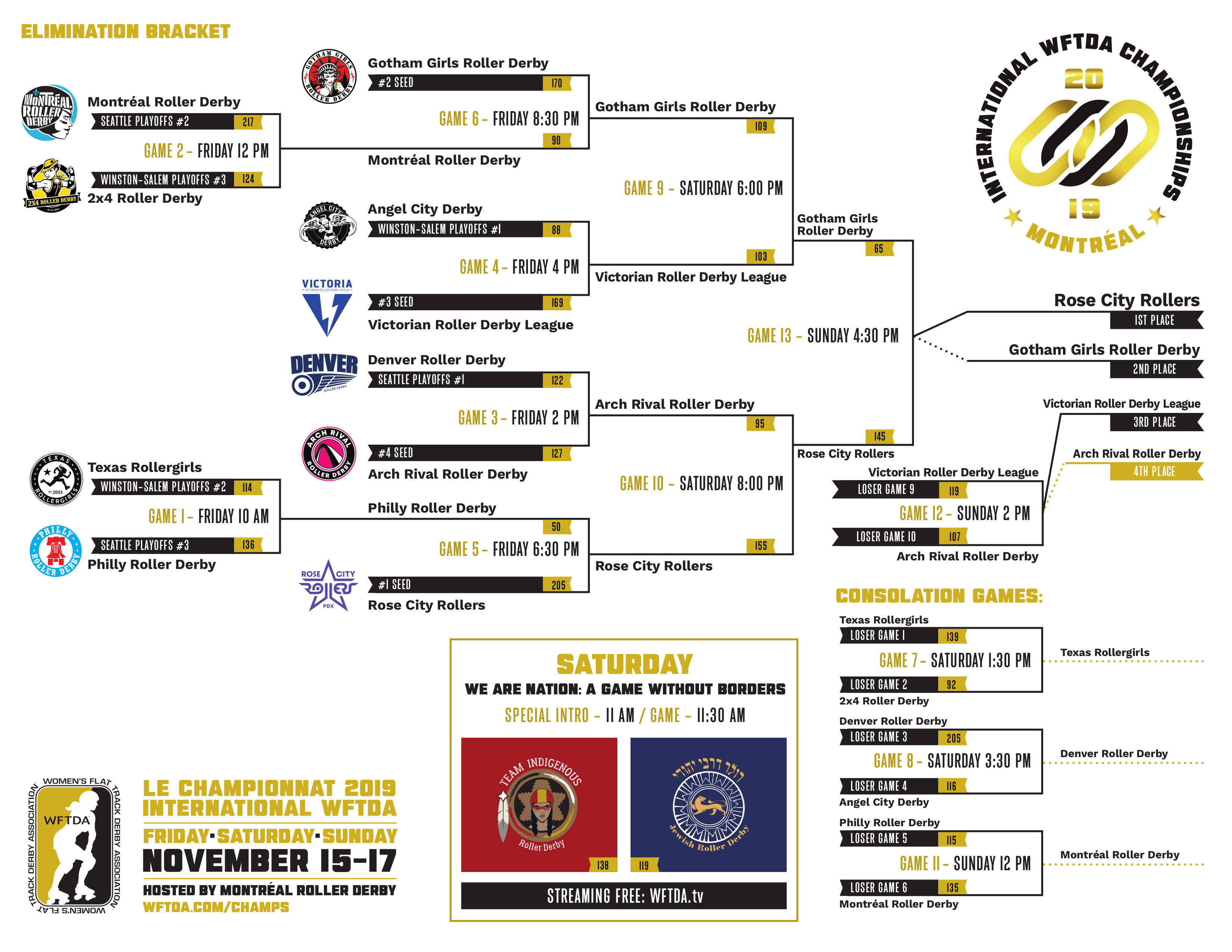